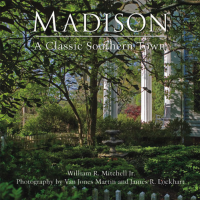 ine is based on excerpts drawn from Madison, A Classic Southern Town (2010), which have been updated as new history information is discovered and documented.